PCT’s January cover story package “What’s Hot? What’s Not” is a series of articles and research findings on major pest control industry issues from a recent PCT/NPMA survey. In the following Online Extra, PCT examines changes in the way PCOs communicate with their customers.

January 20, 2023
Editor’s note: PCT’s January cover story package “What’s Hot? What’s Not” is a series of articles and research findings on major pest control industry issues from a recent PCT/NPMA survey. In the following Online Extra, PCT examines changes in the way PCOs communicate with their customers.
It takes more than providing good service to create loyalty and retain customers. “They want to know that you are responsive and that you are proactive and empathetic to what they are going through,” said Ashley Morrison, president, City Wide Exterminating, Charlotte, N.C.
To increase customer retention, pest control companies improved communication and increased the number of 'touches' with customers, reported 55 percent of PMPs in the 2022 PCT-NPMA industry survey.
“Our communication with customers is very open and it goes both ways. We have made sure we have every means available for customers to talk to us and for us to talk to customers,” said Morrison.
Phone calls were the leading way pest control companies communicated with customers, said 87 percent of PMPs. Next was email (80 percent) and texting/SMS (74 percent). In the next three years, 43 percent of PMPs expected texting to become their company’s primary form of customer communication.
“People are very busy and, for us, texting works very well with our customer base,” said Morrison. She said texting saves time and provides continuity: Any consumer service representative can pick up a text conversation thread and respond quickly to a client.
Texts also are more likely to get a customer response, said Luke Lewis, president, Native Pest Management, Tallahassee, Fla. “People are actually seeing text messages unlike voicemails and missed calls,” said Lewis, who trained employees how to text with customers. “Our goal is to overcommunicate to clients because it’s our job to build that relationship and maintain it for retention and to get referrals,” he said.
To boost customer loyalty, companies also bundled services or sold more services per stop (45 percent) and performed extra value-added tasks around the customer’s house, like bringing up trashcans (41 percent).
Technicians at City Wide Exterminating collect information about customers – birthdays, new births, promotions, illnesses, retirements, etc. – and the company sends them cards signed by their technician and the City Wide team. “It’s those little personal things that really mean a lot to our customers,” said Morrison.
Auto-pay also made customers “stickier,” said Stanford Phillips, president, Northwest Exterminating, Marietta, Ga.
How customers prefer to pay for service is changing, causing pest control companies to adapt. Half (50 percent) of PMPs said the consumer shift to digital wallet apps (Apple Pay, Google pay, Zelle, Cash App, Venmo, etc.) will impact their business in the next three years, found the survey. 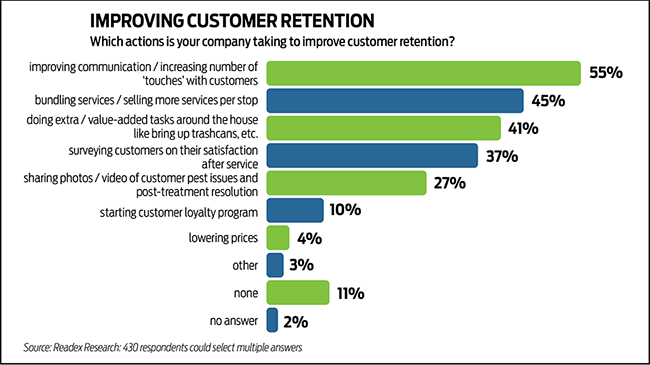 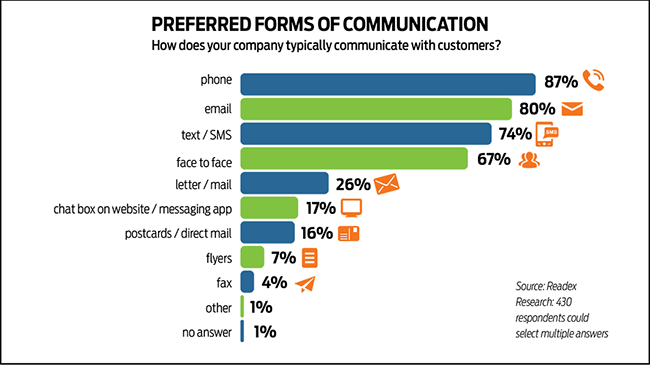